On Sunday 3rd July we ran the Southport Half Marathon! This was intentional on Jenni’s part and quite accidental on mine (Helen) I had innocently driven up to see Jenni on the Saturday when she happened to mention she was running on the Sunday and entries were still open… Being easily led as I am I agreed to run with her!

We got up on Sunday, had breakfast and headed to the start, it was busier than we had expected with 2000 runners taking part in either the half marathon or the 10km. At this point we did start to wonder why we had entered the half? 10km is a nicer distance? Half the time, half the effort? But as you have probably realised by now we don’t generally take the easy option!!

They called the runners to the start in order of expected finish times, 1hr 20min runners went first. How on earth people manage to run that fast we don’t know! Incredible!! We aren’t fast… But we are persistent… That’s all that matters right?

We lined up with the masses which was anyone expected to run in 2hrs or over. Quick race briefing and we were off. For the first 3km or so the half marathon took the same route as the 10km so all the runners were together, then the races split courses, again reminding us we had entered the longer race!

The route was pleasant, it ran through some parks, and then down to the sea front, then it got tough, from around 6miles there was a very strong headwind as we ran along parallel to the sea, this made running even tougher than it normally is, but at approximately 8miles the route doubled back and for a few minutes there was a brief respite as the wind was behind us so this made it slightly easier… Only slightly though as after 8miles running is tough! This picture is taken at about 9 miles, I don’t know why we were smiling? We weren’t feeling too smiley at this point I promise! 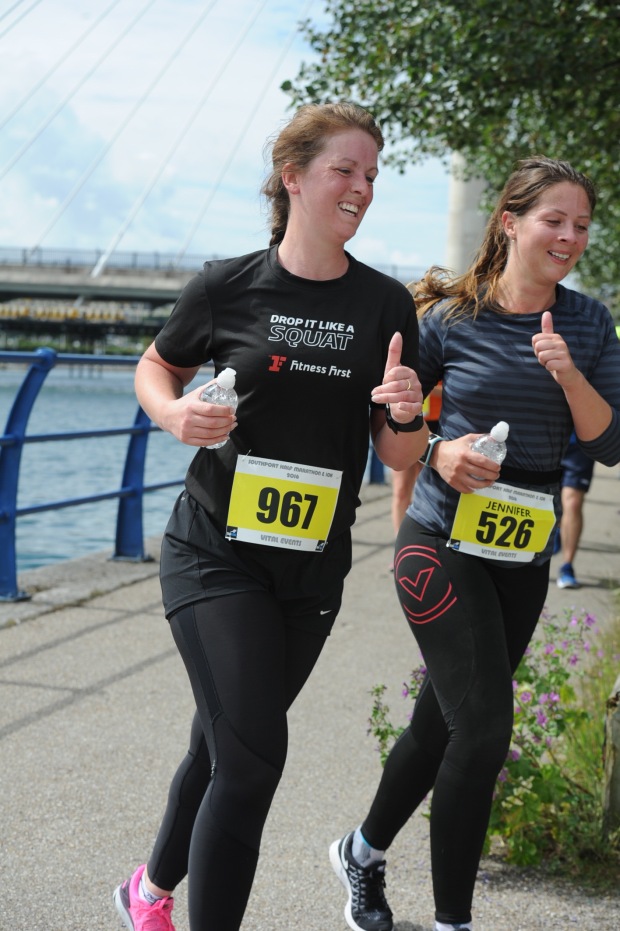 The route then looped round a little coming back onto the sea front briefly before heading slightly inland and back towards the first park we started in, as we ran round the outside of the park we passed the 12mile sign, it was nearly over! Through the park, and then we could see the finish, there was a steel band playing just before the finish line, final bit of motivation, then it was over! We had made it! 13.1miles done, not bad for an unplanned, untrained for run! All in all it was a good race, we would do it again, but the headwind along the seafront definitely made it tough! Race done! Big thumbs up, medal earned! Best keep up the training from here on in, we have plenty of events to train towards!

One thought on “Southport Half Marathon”

And the sun still rises, and still sets, and the outdoors is still beautiful... . . Not all is lost... Had a lovely little spin out this evening, easing off the legs after some tough @gozwift sessions last night and this morning... . . Gorgeous sunset and some well needed outdoor time to myself... . . #sunsetspin #sunsetshots #primaleurope #primaleuropetribe #lifebehindhandlebars #girlswhocycle #bikelife #justkeepspinning #betterbybike #ridemoreworryless
I’m finding all the uncertainty for the coming season a bit difficult to deal with... . . I am struggling to comprehend putting in all the hours of training, mostly inside, (which I find super tough), for events later in the year that may or may not take place... . . As a result my training has been a bit sporadic, unstructured... I know the volumes I need to complete but Iv been going about it a bit erratically... Sunday I did too much, Monday I struggled, and just felt awful, so I took a rest day... . . This week I feel better, I’m on track with both volumes and intensity, but in a much more settled and structured way... . . Whether my events take place or not is beyond my control, but whether I am ready for them if they do is absolutely within my control... . . #dontgiveup #controlthecontrollables #dowhatsbestforyou #indoortraining #indoorsisthenewoutdoors #trainhardraceeasy #headdownwattsup #livbeyond #justkeepspinning #lifebehindhandlebars #trilife
How most of my days start and/or end at the moment... . . #turbotraining #wahooligan #omnirocker #justkeepspinning #indoorsisthenewoutdoors #stayhomeworkout #cyclinglife #lifebehindhandlebars #spinningiswinning #pedalpower
Sunset smiles 🌅 . . I headed out after work for a ride, and it was everything I needed! Sunset, clear skies, cold, fresh weather and it was amazing! . . Sometimes it’s the simple things that mean the most and give the most joy... . . #sunsetsmiles #lifebehindhandlebars #cyclinglife #justkeepspinning #outsideisbetter #ridewithprimal #primaleuropetribe #justride #girlswhocycle
How I’m going to be spending the majority of my non-working hours for the foreseeable future... . . The incredible matchiness (I’m sure that’s a word) makes me very happy! . . Thanks @omnirocker for my custom set up, the aesthetics of my gym set up appreciates the very beautiful addition! . . #trainhard #wahooligan #omnirocker #primaleurope #indoortraining #paincave #girlswhocan #justkeepspinning #lifebehindhandlebars #howweliv #fitspiration
Super grateful for my @wahoofitnessofficial headwind fan keeping me cool during my turbo sessions... Less grateful for the crazy hair it gives me 🙈😂 . . #wahooligan #turbotraining #justkeepspinning #trainharder #cyclelife #lifebehindhandlebars #primaleurope #ridewithprimal #bikelife #fitspiration