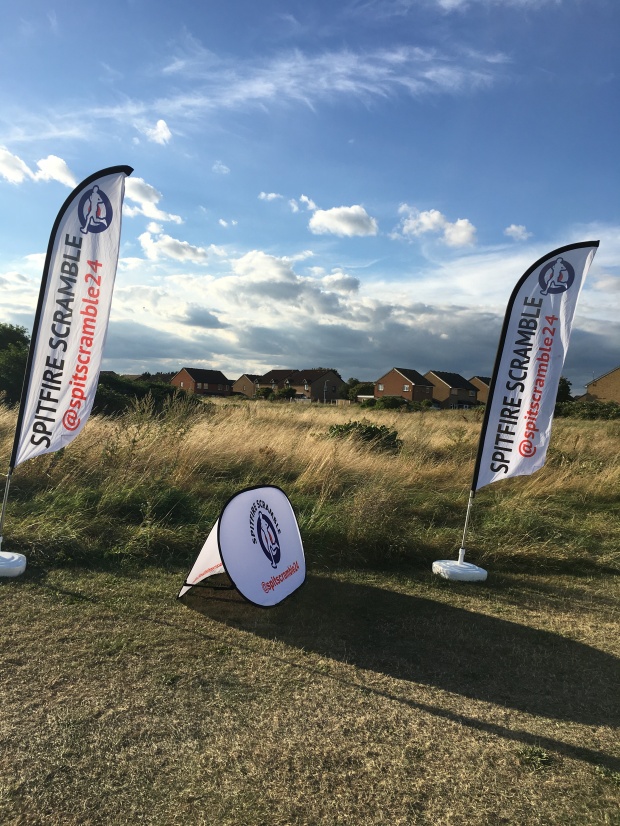 So one of our many events this year is the Chicago Marathon, this is one of the Abbott World Marathon Majors of which we are both aiming to complete all 6.

Marathon training is hard, it takes up a lot of time, running is pretty tough on your body and for me very taxing on the mind, its always my head that gives up before my body, I end up telling myself ‘you can’t run any more, you don’t want to run, you would be quicker walking’ and its a battle to make myself carry on, this doesn’t just happen on marathon type distances, I quite regularly get a few km into a 5 or 10km run and feel like I don’t want to or can’t run the full distance. I also can not do as much running training as I would like. I had a pretty major hip operation at the end of November 2015 and am still having physiotherapy treatment on my hip so the impact of running is not ideal for me, therefore between events I try to keep my running to a minimum and keep the distances short and the intensity light. 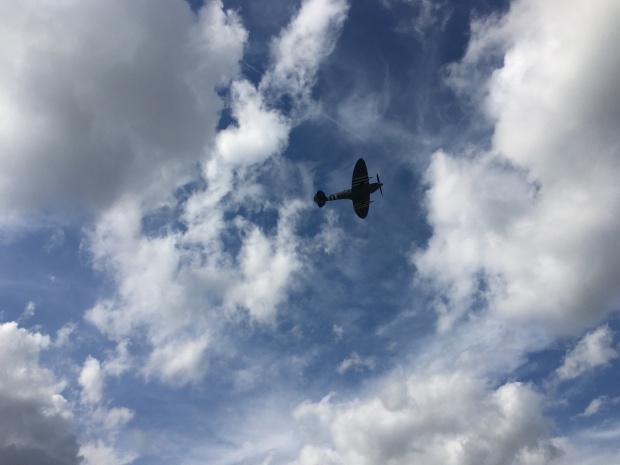 It was then quite a shock to both my body and my mind when I joined a team this weekend to participate in a 24hr relay run called the Spitfire Scramble, they even had an actual Spitfire plane do a flyover of the event! I was part of a team of 8 fabulous ladies and we ran 6 mile laps on rotation with the aim being for the team to complete as many laps as possible in the 24hr period. There had to be a runner on the course at all times and this meant that we ran day and night!

Over the weekend I ran 4 laps – 24 miles. The course was in Hornchurch Country Park, very close to my house which was both a blessing and a curse. A blessing as I could pop home to shower between laps and pick up anything we had discovered we were missing, and a curse as I knew the trails… This means I knew there were hills (I’m not good at hills), I knew the terrain would be varied (I am much better running on the road). The varied ground meant the run was more taxing for me as I was incredibly conscious of the uneven footing and having to concentrate hard on every step to ensure I didn’t fall over! Especially in the dark stages (Very dark – see below pic) when we ran through woods, over bridges, over stiles! When you are running a stile becomes a full on obstacle… I found myself pausing in front of them hauling myself over and struggling to regain my striding on the other side! Apparently some awesome runners were just leaping them like they were hurdles… I am not bouncy, had I attempted this I would have probably ended up rolling around in a ditch feeling sorry for myself and hoping somebody found me. 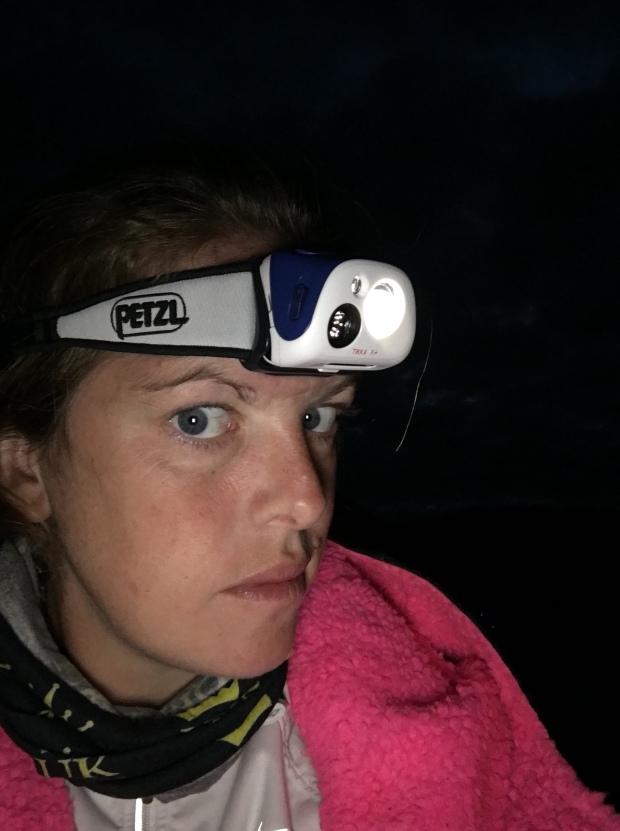 Another challenge of a 24hr trail race is the sleep deprivation! We had set up a pretty cosy campsite on the start field but despite this I did not really sleep in the night, I spent a couple of hours sat down wrapped in my Dryrobe (for anyone who doesn’t have one they are amazing and snuggly and waterproof and awesome) trying to keep warm and not get eaten alive by the millions of midges and mosquitos but no actual sleep. I also cycled a lap in the dark with my friend Lisa (read her blog about the event here) as she ran to give her some company and some extra light from the bike as the trails were pitch black. So all in all time for sleep was scarce! I did however pop home at around 7am after I had run a lap at dawn and made the mistake of having a nap for about 90mins, this meant I woke up stiff, achy, and feeling hungover! I wasn’t hungover as I hadn’t drunk, but that feeling of being dehydrated, disorientated and a bit out of sorts was not pleasant. Back to the park and as a team we were balancing somewhere between 3rd and 4th place, an amazing achievement. We agreed as it was close we would do our best to aim for 3rd and I agreed to run another lap. I wasn’t sure my legs had another 6 miles in them after stiffening up so much in the few hours since my dawn lap, but I made an effort to stretch out, walk round and try to bring them back to life whilst our super speedy team mate Danielle ran her 4th lap. She had expected to be a bit steadier on her last lap, so it was a shock less than 40mins later to look up from where I was stretching and realise she was already approaching the finish, I had to sprint to the start line to be there for the handover!

I survived lap 4, it was not my finest lap but I made it, having run 24miles in 24hours I am hoping I am well on the way to being prepared for the Chicago Marathon (8 weeks to go). My legs are still not thanking me for this intense training though, the trouble with running then taking a break and running again is there is time for the muscles to stiffen up and lactic acid to build up. I did say to the girls that I think I would rather have run the 4 laps back to back than run and stopped and run and stopped, however the experience was incredible and I have decided that next year I will try to train by running multiple laps over a weekend to prepare my body for the event. Yes… We are going back again… Despite the pain, the dark, the stiles, the mosquitos, we had an amazing time and are already planning our strategy for next year… Team Scrambled Legs will be back to defend their 3rd place trophy… Yep – I hadn’t mentioned that, our efforts paid off and we were 3rd in the female teams of 6-8 runners! It was all so worth it when we got our trophies! Roll on Spitfire Scramble 2017! 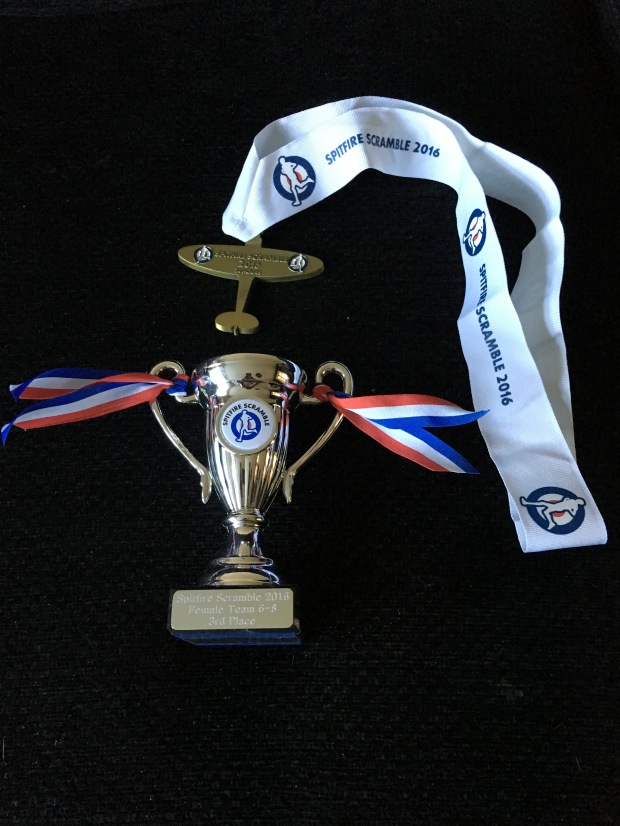 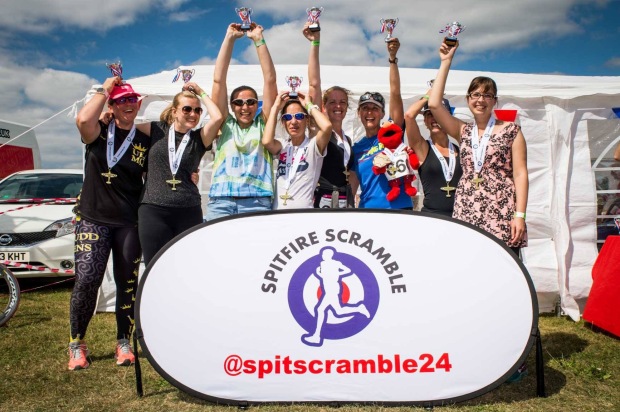 7 thoughts on “Marathon Training at the Spitfire Scramble”