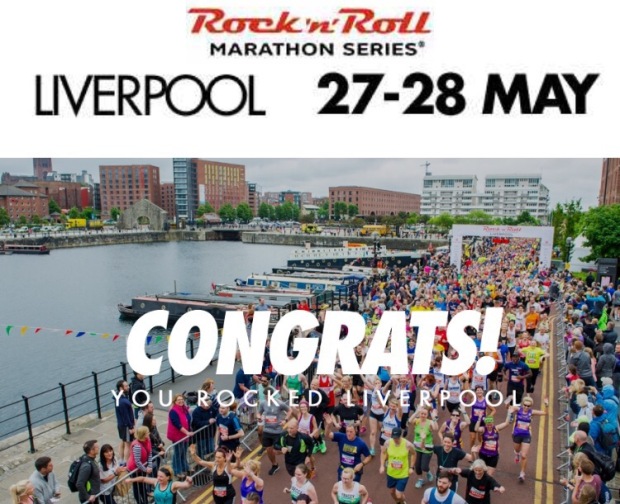 This weekend was a rare weekend that Jenni and I actually spent together. After a swim on Saturday morning in a local lake (Tri Farm) I headed up to Liverpool on the train as we were both taking part in the Rock and Roll Half Marathon on Sunday.

For Jenni it was her first running only event of the year and for me it was my first event post ankle operation, I’m not actually back to running properly yet so I had said I would go along and run/walk with a friend who had entered it as her first half marathon as it sounded like a lot of fun. 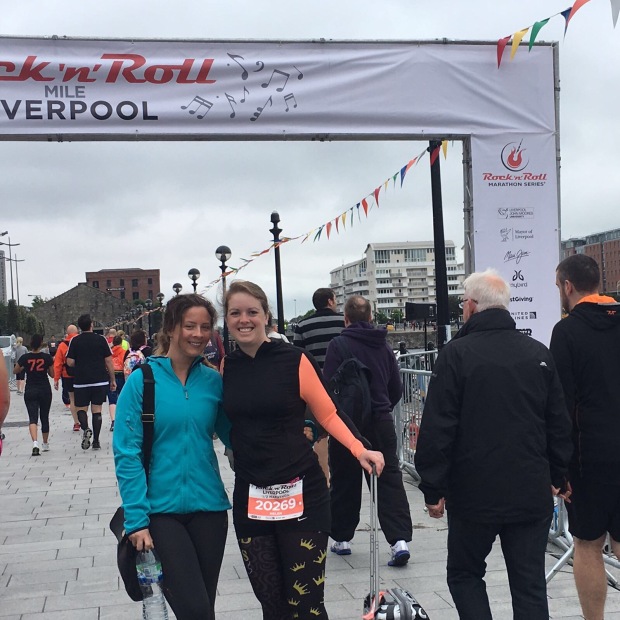 Sunday morning arrived and we headed to the Echo Arena and joined a mamouth queue for bag drop, I understand bags need to be searched, but 4 people searching thousands of bags and one extremely long queue does not seem the most effective way of doing this? It was cold outside and windy and all in all not the best way to prepare for the race ahead.

Once through the bag check in (40mins later) we headed out to find our start corral, these were grouped from 1-20 depending on your expected finish time… We were supposed to be in 20, except that didn’t exist, after about corral 15 there were no barriers, then there were signs up to 19, but no 20, and everyone from 15 onwards was just stood around in a muddled group…

9am start time came and went… no announcements to explain the delay, just cold confused athletes standing around… eventually the race got going and we crossed the start line at approx 9.40am. The start had no atmosphere, no warm up, no music or mc, no announcements, it was dull and lacked atmosphere.

Then we were off, past the stadium and onto the streets of Liverpool, the course was gently rolling up and down hills and we were walking the ups and jogging the downs, about 3km we were caught by the back marker but then we made an extra effort to get moving and ensure we remained in front of him as we didn’t want to miss the cut offs and be removed from the course.

Successfully in front of the back marker and with quite a few competitors behind us it should have been a pleasant experience however at about 4-5miles we found ourselves being chased by 2 small road sweepers, I understand they need to keep the event tidy but we weren’t at the back, they were driving quite dangerously close to us and as they swept up the bottles the caps were bursting off and could easily have caused an injury! They also overtook us, this was not a pleasant experience.

There were apparently lucozade aid stations on the course, these were all closed by the time we got to them, bottles strewn all over the road were the only sign that they had been there…

There were also some bands and music stations along the course, some of these were fab and fun and encouraging, others weren’t playing, hadn’t set up yet (presume only bothered about the marathon runners?) or were just testing their systems, as far as rock and roll goes that wasn’t the experience I got…

Hey ho, it is what it is, we were in good spirits and continued on, the route then went through some lovely parks and it truly was very pretty. Then in a section between some parks 2 full sized road sweepers were at work, one had managed to get caught in the barrier tape so it was unclear as to where we should go, they were driving pretty fast, again bottle lids exploding off as they swept up the bottles and this was an unpleasant experience, we were not at the back, we were still on the course, they shouldn’t have been driving around us and they could potentially have injured us. If a race has a cut off point and a back marker then all competitors in front of that should get the same experience, this was certainly not the case.

Still, on we went, back into some more gorgeous park land with lots of gentle down hills, some lovely charity supporters offering bananas and then we were over halfway, spotting other runners in the distance and catching up with them became great motivation. Then with 4 miles to go the course turns alongside the Mersey and runs in a straight line for almost the last 4 miles, by now a number of marathon runners (very fast marathon runners – sub 3hrs) were starting to run through so we cheered and encouraged them as they passed and they were very encouraging in return… 10miles, 11 miles done, we were going to make it and not a back marker in sight! Yay!!!!

The support of the crowds as we entered the final section was incredible! The finish was loud and exciting and gave us the encouragement to make the final run down to the finish! 13.1miles done, and another medal earned! It was an amazing medal as well!

All in all I enjoyed the course and I imagine for the masses the experience would have been very different, however for a race that says it caters for runners and walkers and has a walking back marker I firmly believe that more should be done to ensure the runners at the back of the field have a good time, know where they are going, have access to the same aid stations and motivational support as the faster runners. Closing sports drink stations and sweeping the course whilst people are trying to continue their race is poor form!

Jenni here – Helen and I had very different race experiences on the day. For me the actual race was great with tonnes of support and a fab atmosphere in my home town. Loads of people turned out to cheer us on and hand out jelly babies. I also really enjoyed the music at each mile marker, particularly those with a nod to the Beatles classics such as Penny Lane played on penny lane. Running past some iconic music venues such as the Cavern Club, through the stunning Sefton park and to the Albert Dock was amazing. I had only run 6 miles to date so just wanted to plod and get through the distance as this was going to be my longest run before Staffs so I’m really pleased with a steady time of 2:22. Not fast but it was quite easy and a confidence builder. The highlights were the concert at the end and beer tokens. I’m a big fan of a beer post race! So great race for me but I would agree with Helen, if advertised as catering for those walking the distance it’s a shame the support wasn’t there for those that actually deserve it more than most. 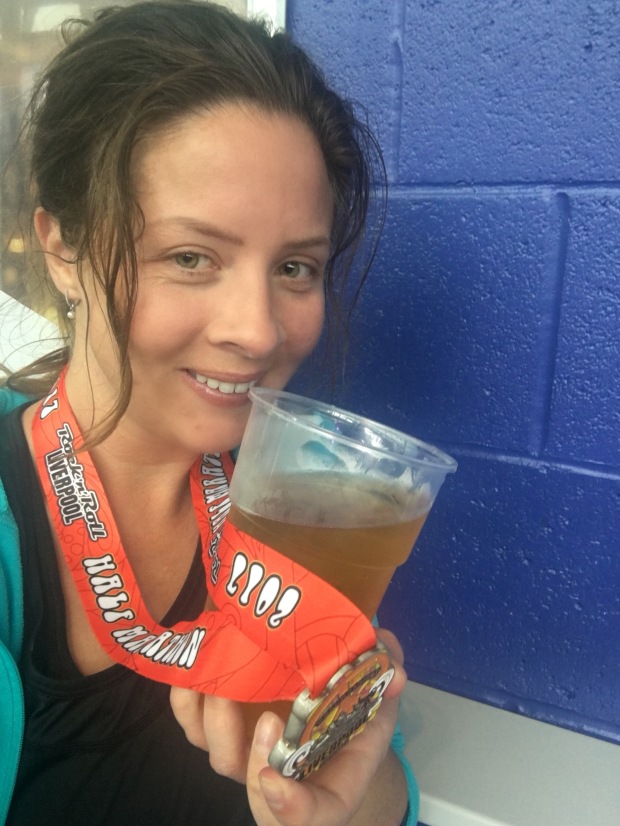 4 thoughts on “Liverpool Rock and Roll Half Marathon”