Part of my commitment as a Primal Europe Ambassador is to take part in some of the Velo29 events. 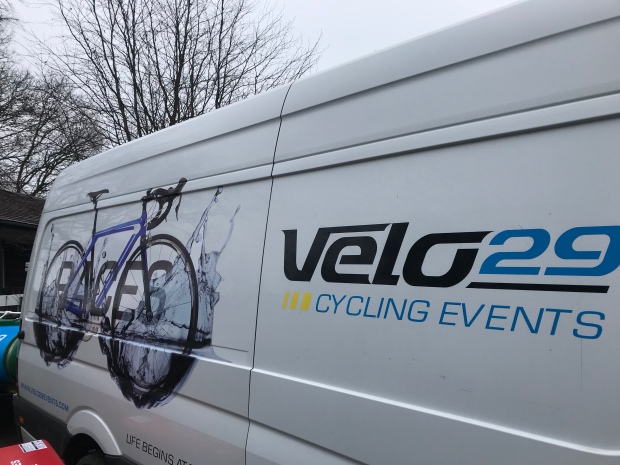 Primal Europe are the official clothing sponsors of the Velo29 sportives and they have some amazing custom jerseys for these events – you can check them out here Adam bought the York Leeds York one and its awesome!

At the beginning of the year I looked at the list of events and tried to find some that suited my training plan. This is harder than you would think, especially as I am training for a marathon at the moment so most of my weekends are taken up by long runs. But the York Leeds York event was quite early season and on a Saturday, so meant I could travel up on Friday after work and still be back for a long run on the Sunday!

Friday night we drove up to York (we being me and Adam who had kindly agreed to come along with me). Bikes on the roof of the car, boot packed with tons of kit as the weather had been a little unpredictable, on Thursday it had snowed in both York and Leeds, this could be a very cold event! Luckily the snow had passed, however this was replaced by some quite persistent rain and it rained for the whole drive, poor bikes got very soggy on the roof of the car. We eventually arrived in York at 10.15pm on Friday, checked with the hotel that we were ok to take the bikes up to our rooms, unloaded the car, then ordered a Chinese takeaway (well we can’t do a sportive without fueling). All in all this made for a rather late night.

Up just before 6am the next morning to pack up, have breakfast and check out.

Jenni had also driven over from Southport to ride with us and arrived at the hotel quite late. Unfortunately she was rather ill on Saturday and was then unable to join the event, so this left it with just me and Adam riding together.

We headed to the start at the York Auction Centre and there were already so many people there. The car park was packed solid, and there were so many people around. I hadn’t quite expected such a massive turnout to a sportive so early in the season, especially as the weather was not great. It was raining when we arrived at the start, not too badly but it was destined to be a damp ride!

Adam and I headed in to registration and collected our rider numbers before heading over to the Primal Europe stand to introduce ourselves. This was the first time I had met any of the team in person and it was lovely to finally put faces to names and meet James and Ben. I used this opportunity for a cheeky selfie with James and then it was time to get the bikes and ourselves ready for the ride ahead. 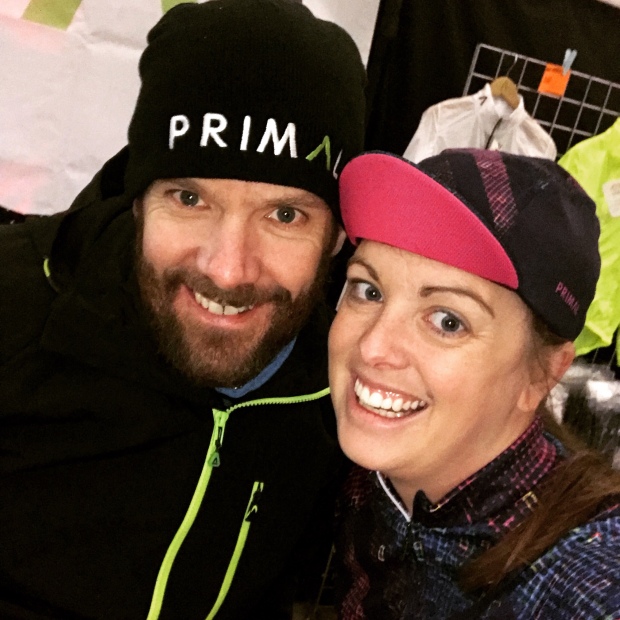 Once ready we joined a queue of riders ready to start, the queue snaked round the outside of the auction centre as the race itself was starting from inside the building. Everyone waiting to start seemed in good spirits and we spoke to quite a few people who had done the event the previous year (its always a good sign when people go back for a 2nd time). One poor gentleman had managed to forget a wheel as he had had to dismantle his bike to pack it in the car and hadn’t remembered to put the wheel in the car. The organisers did call over the tannoy to see if anyone had a spare but unfortunately no one did, so he had to head off to have breakfast and wait for his friends and family to finish.

Quick race briefing and we were off. Almost as soon as we started so did the rain, it was varying in intensity from heavy miserable drizzle, to angry sideways heavy rain. But this didn’t appear to deter any of the riders. Some of the roads were incredibly flooded, at one point I came around a corner at the front of a small group and shouted ‘swimming pool’ there was no other way to describe the large puddle that spanned the entire road. Luckily it was only a few inches deeps and we made it through to drier land! (I do love a triathlon but taking my bike for a swim was not on the agenda!)

After some initial flooded and muddy roads the roads towards the mid point were a bit easier, less mud and surface water but it was colder! As we got towards Leeds the temperature dropped noticeably and there were still patches of snow banked up at the side of the roads. We arrived at Harewood House rather cold and damp. It was an absolutely stunning location and I am sure on a summers day I would have stayed a little longer, sat on the grass and taken pictures of the house, but I was pretty cold and my fingers weren’t too keen on trying to take photographs, I do feel like I might need to go back one day just to appreciate how lovely it really was.

I did however manage to take photos of some participants bikes racked in the snow! 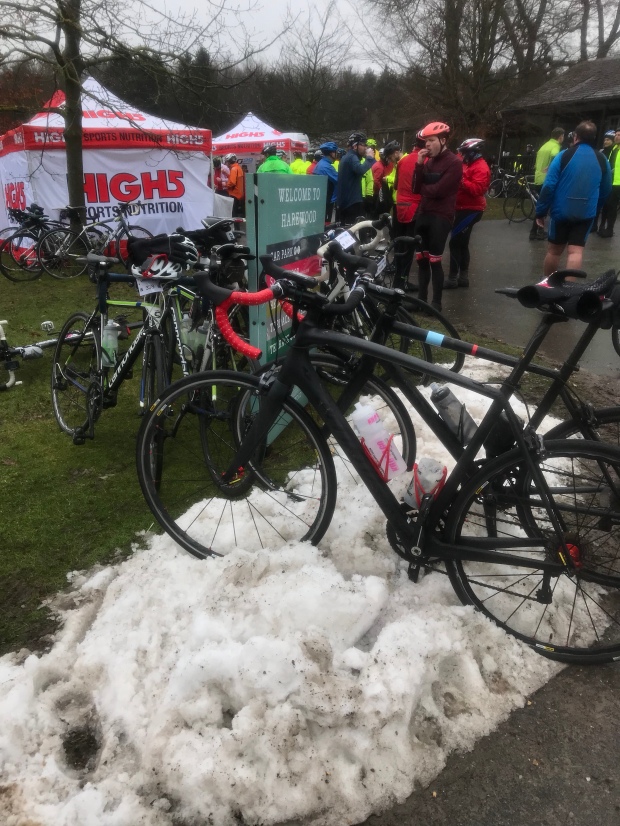 We queued for a very welcome hot drink and I ate a very sweet and tasty flapjack before a mass undress operation to try to go to the bathroom. Cyclists – I am sure you all sympathise. I had to take off layer after layer of clothing to be able to get to my Onyx Thermal bib tights.

Then we set off on the 2nd half, not wanting to hang around too long or get any colder than we needed to be. Once again all cyclists seemed to be in good spirits on the ride back, even a poor lady whose hub in her rear wheel had died, she was cheerfully waiting to be picked up by the mechanics and we stopped to chat to her for a few mins and check she was ok.

I also managed to ride for a while with some ladies from the Yorkshire Lass Cycle Club. They were really lovely and friendly and it was so nice to spend a while chatting to some new people as the miles passed by. One of the ladies husbands was a triathlete and had done Ironman Vichy last year!

65 miles later (we did the medium route) we arrived back in the auction centre to be presented with our medals, have our photo taken and the all important post ride snack – an actual bbq’d sausage in a bun! This is possibly the best post event food idea ever and was most welcome as a warm filling food item after quite a cold event.

Bikes back on the car, quick change in the carpark – thanks to Dryrobes – they really do make post event routines so much easier. Then a quick goodbye to the Primal team and it was time to begin the long journey home. We arrived home approximately 10pm that night. A crazy long weekend, exhausting but fabulous! I loved every minute of it, now where is that Velo29 events list, I need a new target!