I entered the medium route of the Cheshire Cat a few months prior to the event as a good early season target. But best laid plans don’t always work out the way you intend, and after 4 months of being ill and still undergoing a lot of medical testing I knew I wouldn’t be sensible to try and attempt the middle distance option when the furthest I had ridden prior to the event was 27 steady miles that I found tougher than I should.

So Jenni and I decided to do the short option – at 52 miles it was still a very decent distance, but this option missed out the majority of the climbs. I was a bit disappointed to be taking the shorter route, especially at not getting to attempt the Mow Cop, but better to make a sensible decision than to end up stranded part way along the longer route and unable to continue.

The Cheshire Cat Sportive is a Velo29 event sponsored by Primal. Velo29 run a number of sportives throughout the year and last year I took part in the York Leeds York event which was great, and I was looking forward to participating in another Velo29 event.

We stayed in a local Premier Inn within 1.5miles of the start, this meant I could leave the car at the hotel and didn’t need to use an event car park, however there were two car parks arranged close to the start for those who needed to drive to the event.

Registration was in a lovely park, and the weather was stunning for the start. After a frosty early morning the sun was out and it was a beautiful day for a ride.

Registration was a quick and easy process, collection of numbers was organised alphabetically, minimal queues when I arrived and swapping my distance to the shorter option wasn’t a problem at all.

Primal were there with a merchandise stand and it was great to catch up with James before we headed to the start.

James took a quick picture and video of us at the start line and then after a quick briefing by the organisers we headed out onto the lanes.

The route was absolutely stunning. The gorgeous weather helped of course, but being spring the roadsides were covered with daffodils, we passed by plenty of fields with sheep, lambs, horses, cows and generally plenty of wildlife. Nice smooth rolling lanes meant the first few miles passed quickly as we headed out through the Cheshire Countryside.

After 10 miles or so the wind picked up a bit so the ride became a bit tougher, also the wind was cold so a sharp reminder that winter wasn’t far behind us, but still the ride was very pleasant. The roads were quiet with minimal traffic, great route planning by the Velo29 team as clear roads makes such a difference. No one wants to feel like they are hindering other road users so it was great to be on quiet roads out of the main flows of traffic. 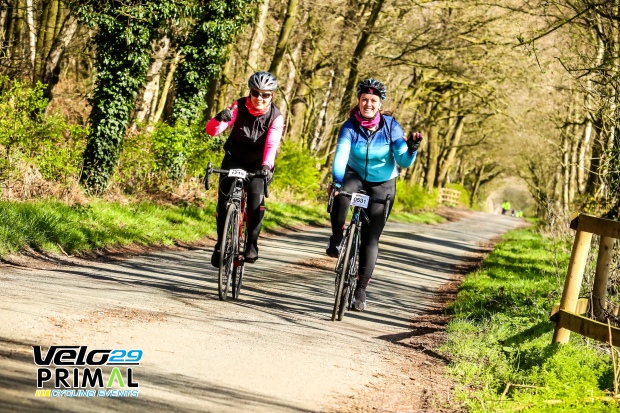 There was a well stocked feed station at mile 29 and this was a welcome stop for a cup of tea and a sausage roll… felt like a good thing to eat! The Velo29 feed stops are always stocked amazingly with food you genuinely want to eat, and the cup of tea helped us to defrost a little bit ready for the last 23 miles.

Again the roads were predominantly quiet on the ride back to the event HQ. Still gentle rolling roads, with only 2 noticeable climbs that were short (if not particularly sweet to my undertrained legs).

We arrived back at the finish, another photographer captured our final moment of the ride and the Velo29 team were there handing out medals!

First sportive of 2019 done and this ride was done on my new LivCycling Langma purchased recently from Giant Store Loughton! I was wearing my Primal Europe Aqua kit which is my current favourite cycling kit and I love the fact there are matching arm warmers and gilet so you are prepared for all weathers!

I am pleased to say the ride didn’t feel as bad as I had expected!

Onwards and upwards from here as I have plenty of cycling planned for this year.

As a Primal Ambassador my entry into the Cheshire Cat was complimentary, but all opinions are my own (Jenni purchased her entry).

My Primal Europe Aqua kit seen in these pictures is a mix of items gifted by and purchased from Primal Europe. (I loved it so much I had to be sure to purchase all the items available to match the main kit).