This weekend we went on yet another adventure…

Part of our list of challenges is to take part in 4 major cycling sportives and we are searching for ones that aren’t your usual every day challenge. This led us to Sweden to take part in the Vätternrundan.

On Thursday we got up very early! We were being picked up by taxi at 2.45am, as we had an early flight from Heathrow, therefore we had packed our bikes and suitcases the night before so we could literally roll out of bed and head out to the car. We arrived at the airport, checked in and had some breakfast before the flight.

The flight was easy and we were soon in Sweden waiting apprehensively for our bikes to arrive at the outsized baggage exit, this is always a nervous moment for some reason, but we have never had an issue with our bikes making it to our destination, for some reason its just always a worry! Bikes arrived safe and sound and we headed to the car hire terminal to collect a car that we weren’t actually sure was big enough. It had proved surprisingly difficult to hire a car as so many people were flying in and also needed large vehicles to transport bikes. There were 3 of us (Adam came with us) so 3 people, 3 bike boxes and luggage was quite a lot to fit into one 7 seater car, but we managed it.

It was a 2.5hr drive to where we were staying, which in turn was approximately 30mins from the start of the event. But it was the most perfect location, a gorgeous little cottage on a farm with lots of land around it and it immediately felt like a home from home.

Adam set to work building our bikes whilst we napped – we were pretty exhausted after the early start and Adam had managed a little sleep on the flight so was the liveliest out of the 3 of us at this point. We were super grateful that he got our bikes up and running!

Then we headed into Motala to register, pick up our numbers and have some dinner (pasta all round as we were ‘carb loading’) then back to the cottage for an early night. 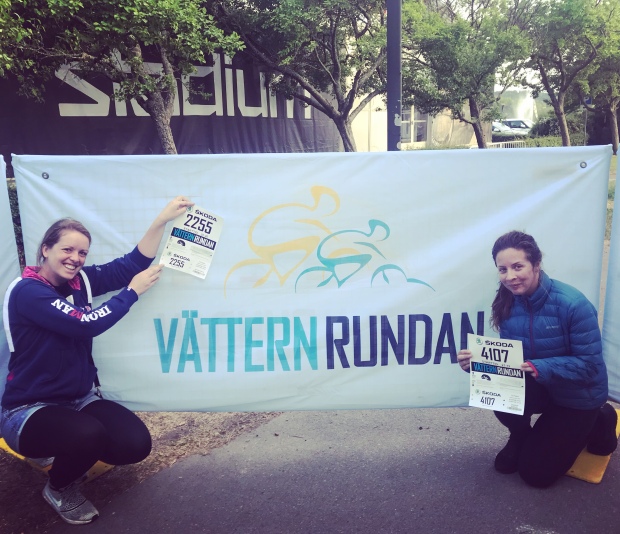 Friday morning we had a leisurely start not wanting to tire ourselves out before the night ride, we headed into Lingkoping for lunch, which turned out to be amazing, as the local university were graduating and the whole town was filled with people celebrating. Then back to the cottage for a lie down, we were trying to get a few hours sleep before we started, but this is difficult when you are waiting to start a big event. We got up, had some ‘breakfast’ – yes breakfast at 6pm, eggs on toast – we were trying to start a new day really so it seemed a good meal to have. Then bikes into the car and off we went.

We were super lucky to be able to park very close to the start of the event, so we didn’t have far to go to get down to the start. 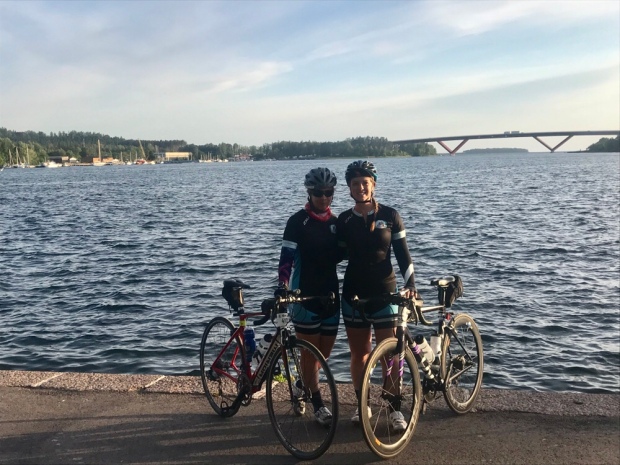 A few quick photos by the lake and then we were off. The first stage started well, great road surfaces and we had started with a group of cyclists of similar abilities so were working in a group which makes things easier. Then at 13 miles we had our first bit of chaos. A loud snap was heard and then some rattling… Adam had broken a spoke, this meant his wheel was no longer running true and he needed to stop or risk further damage. So we all pulled over at the side of the road and debated what to do. There was a local couple at the side of the road so Adam went over to talk to them and they said that support vehicles usually passed through approximately every 15 mins, so we rode on and Adam waited for the support car.

This left us riding without other cyclists close by and it was pretty windy on this section so we found the next few miles a little tougher than we would have liked, but it was still great to be riding together and a few miles out from the 1st rest stop we saw Adam’s bike go past on a car and knew he had been picked up! When we arrived at the stop the mechanics had been unable to repair his wheel but they had one available for him to purchase which meant we were able to continue as a group. This stop was a real party atmosphere, bands playing, lots going on and it was a great way to lift our spirits.

Back on the bikes, we rode on, it was starting to get quite cold now and none of us had anticipated such a sharp drop in temperature (it wasn’t forecast to get as cold as it did) so it took a few miles to warm up, and by the next check point we were wishing we had worn more clothes. A quick pause for a cup of tea and on we went again, 83km completed, almost 1/3 of the way. At 104km there was a hot food stop in Jönköping, this was a welcome sight after almost 4 hours of cycling we were cold and hungry. They served meatballs and mashed potato and it was amazing.

Adam was having some issues with his gears just before this stop and put the bike in to be looked at by the mechanics, who discovered one of his cables had snapped and his bike needed re-cabling, so they did this whilst we had something to eat. This did mean that we spent quite a while longer than anticipated at this stop and got very cold. Jenni managed to buy some arm warmers that were just big enough for her to wear on her legs, and whilst this was highly amusing it did help her to warm up a bit on the next stage.

The next section had a bit more climbing than the previous ones which meant we were occasionally separated as its difficult to maintain identical pace to each other on inclines and declines so this felt a little lonely at times, however we did get to witness a gorgeous sunrise over the lake.

Another quick hot drink and we headed on towards Hjo which would be the next stop at 171 km. We managed to find a few cyclists of a similar speed on this section so we joined them for a bit, it felt nice to have some company for a while and we arrived in Hjo to be greeted by smiling hosts serving hot lasange and frosties… Yep we genuinely had lasange and cereal in the same meal at 5am in the morning! 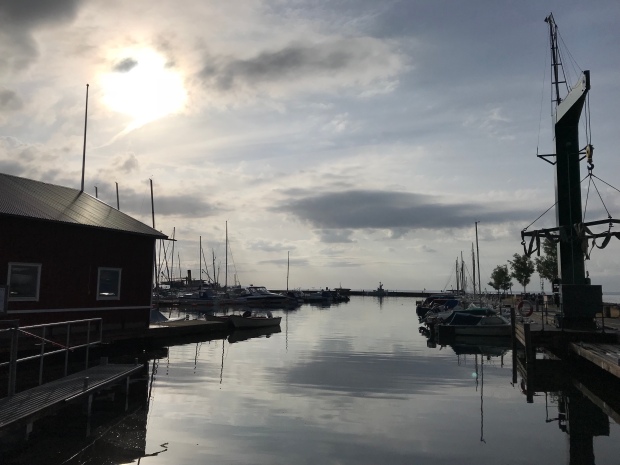 By now the sun was up, it was brighter and felt a little warmer, although we were still cold getting started on this stage, but we were well over halfway and starting to realise that the finish was almost in reach! Fueled by our interesting breakfast/dinner we carried on and thankfully had no further mechanical issues. It started to get warmer and by 250km we had removed some of our extra layers. It had however started to get windy again and the section approaching 250km was quite tough with some open sections on dual carriageways including a few ascents and a ride across a bridge over the water which meant we were working a bit harder to keep our bikes on track! But we were nearly done! A quick top up of our water bottles, arm warmers off and we were heading to the final stages.

Another stage with a bit of elevation meant again we were a little separated over this section but we arrived in Medevi within a few minutes of each other. We had a brief pause, ate buns filled with honey and knew that this epic challenge was almost over. The last 26km was very pleasant, through some wooded areas and passed very quickly. We could hardly believe it when we turned the final bend towards the finish line!

We finished the event, collected our medals, ate plenty of food, bought some ice creams and relaxed in the event village hardly believing we had made it. 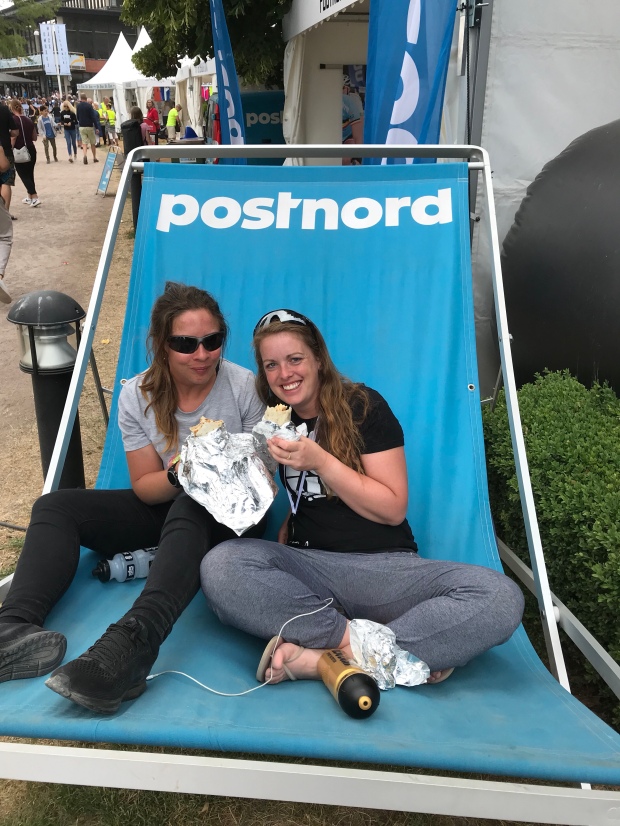 This adventure included 300km of cycling, a lot of food eaten, plenty of shivering, teeth chattering, some mechanical problems, lots of smiles and a great sense of achievement. We absolutely loved it, great event, fantastic experience and we would highly recommend it if you are looking for an endurance cycling adventure.